Home > Leering > About us

It all started in 1939, when on April 20, Mr B.A.M. Leering and his business partner established a technical trading company in the field of foundry materials. The cooperation with the business partner was discontinued after two years. Mr Leering then continued the company, under the name that is now known nationally and around the world: Leering Hengelo.

At that time the production palette consisted primarily of foundry materials. To survive during the war years, it was necessary to develop all sorts of different activities. But customers too needed new innovative products at that time and during the reconstruction period. Leering Hengelo had the right industrial contacts and, already then, had the expertise to select the right products and advise their clients.

The foundries needed to do more and more finishing on raw foundry products. Thus, as the years progressed, the product package expanded to include hand tools (bolts, nuts, saws, files, etc.), laying the basis for today’s machining and clamping tools. Then sawing machines were added, and ultimately the blasting equipment.

Leering grew steadily into a medium-sized company in this area. At that time it was still headquartered in an old farmhouse on the Oude Boekelsoweg in Hengelo. Expansion was necessary next to the farmhouse already in 1956. Ultimately the growth resulted in the opening in 1961 of a commercial building, modern in its day, on the Binnenhavenstraat in Hengelo, which was expanded in 1964 to a total area of 2000 m2. But in the 70’s, this location again became too small.

1977 – Move to new building on Barnesteenstraat

For the period, there was an enormous investment in the new building in the new industrial park at the edge of Hengelo near the Twente canal. A modern industrial complex of 4000 m2 was built on 10,000 m2 of property.

1982 Becoming a producer as well as a supplier

In 1952 the package was expanded into the blasting and surface treatment technology sector. A department for blasting technology was added to the existing product range. This prompted increased growth.

In 1982, Leering Hengelo started in-house development and production of blasting equipment. Customers wanted higher quality blasting equipment and when it was not available on the market, Leering Hengelo started to develop it in-house. No effort was spared to create the best blast cabinets on the market. Looking back, that was a very good decision. The now globally famous blast cabinet brand was created under the Normfinish brand. 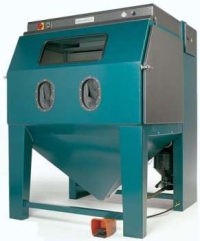 With increasing international demand for our Normfinish blasting equipment, the division of blasting technology got its own export branch. In addition to Germany and other countries within Europe, there were also regular requests from countries such as America, Singapore, Indonesia, Taiwan and Japan. The Leering Hengelo name became a global concept.

Leering Hengelo has consolidated its position in the Benelux market through the years. In addition to the familiar activities (foundry, machining, blasting and sawing), in recent years we have added activity in cleaning technology.

Recently, a completely revised design for blast rooms has been introduced.

Learn from our experts

Watch for parts and accessories for your machines in our webshop